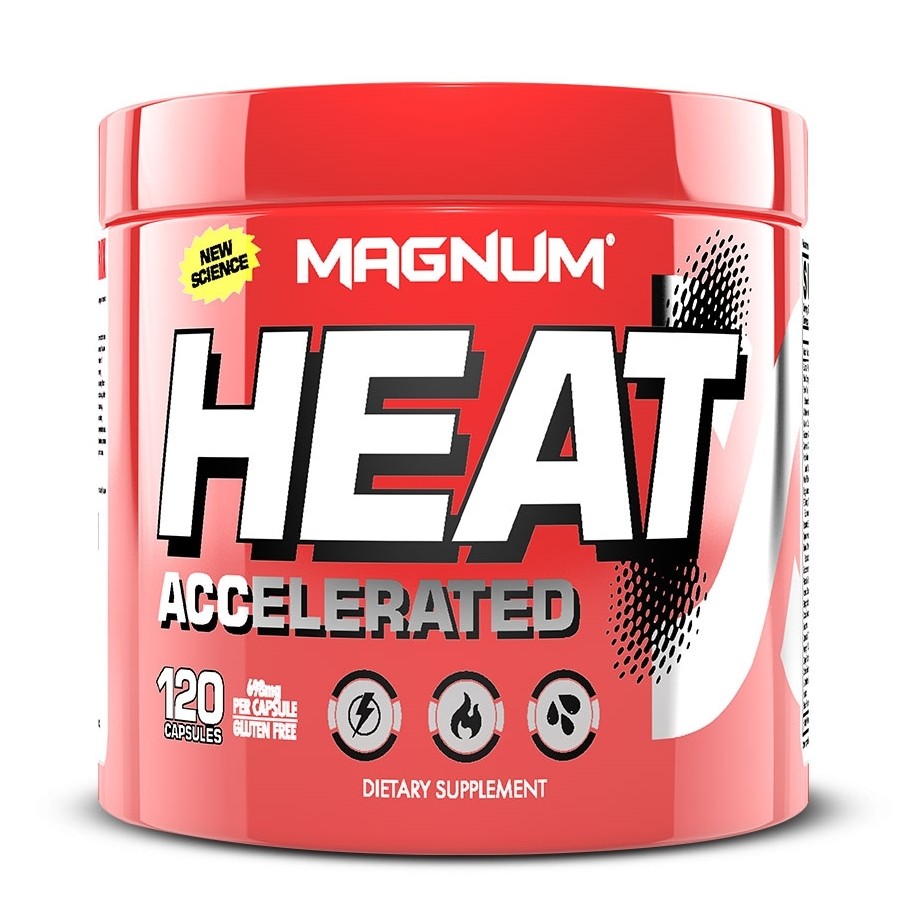 Magnum Heat Accelerated is a fat burner that combines 30 fat-incinerating ingredients to support the optimal environment to burn fat. This product will have you firing on all cylinders! Infusing thermogenic agents and natural stimulants, Magnum Heat Accelerated raises the body’s core temperature to promote fat loss. Magnum Heat also contains a blend of Adaptogens to support the body’s fat reduction and physical transformation. Adaptogens are anti-oxidants that help support endocrine hormones and may promote immune system function, help the body cope with stress and promote optimal homeostasis. Magnum Heat will help provide the support you need to attain the body you desire.

With Magnum Heat Accelerated you can expect:

• Improved energy & mental focus
• Increased body temperature
• Permanent fat-loss, not just while you are on the product

How Magnum Heat differs from other fat burners:

• A dramatic increase in energy, though it has only natural stimulants so you wont get jitters or anxiety
• The thermogenic effect (increased body temp.) is noticeable quickly (during exercise – you feel very hot)
• There are 5 Adaptogens to balance your system so you don’t feel “off” or imbalanced
• The very strong and potent ingredients in Heat® will improve you circulation, support your heart, increase your energy, and much more…
• You will burn fat without losing muscle mass
• There is no yo-yo effect (you wont put the weight right back on)
• There are no side-effects
• There are no addictive ingredients
• It is ephedrine free
• Every ingredient is Pharmaceutical Grade

Use Magnum Heat If your goal:

To start, take half the recommended dosage for the first six days.

More About the ingredients in Magnum Heat:

The seed of the Guarana fruit is a stimulant with thermogenic and diuretic properties. Guarana also affects how quickly the body perceives itself to be full. One study showed an average 11.2 pound (5.1 kilogram) weight loss in a group taking a mixture of yerba mate, guarana, and damiana, compared to an average one pound loss in a placebo group after 45 days. All three of these ingredients are in Heat Accelerated.

Kola Nut Seed Kernel is the seed kernel of a large African tree grown commercially around the world. It's chief constituents are caffeine, theobromine, tannins and phenolics, kolatin, and kolanin. Kola nut has thermogenic and stimulant properties.

Contains a rich supply of vitamins (A,C & B complex), minerals (calcium, magnesium, iron, sodium potassium, manganese, silica and phosphorous), choline, inositol and carotene. Yerba Mate stimulates the central nervous system without becoming addictive. It induces better patterns of sleep. Acts as a mild diuretic. It helps to reduce fatigue, speeds up your metabolism, and reduces the effect of stress. Although the active ingredient in mate (mateine) resembles caffeine structurally and belongs to the same class (xanthenes), mate does not contain caffeine.

Often taken when dieting because of its ability to balance blood sugar and dissolve fat cells as well as preventing new fat from penetrating the cells by redirecting it to the muscles where it is burned off, thereby eliminating fat deposits. Grapefruit alters the way some drugs are broken down in the liver. Ingestion of naringin and related flavonoids that are present in Grapefruit can also affect the intestinal absorption of certain drugs, leading to a prolonged effect of certain stimulants.

Promotes the loss of visceral fat. This is fat in the tissues lining the abdominal cavity and surrounding the internal organs. It is typically associated with the “apple” body shape. Visceral fat can lead to an increased risk of metabolic syndrome and Type-2 diabetes. Chlorogenic acid and caffeine found in Green Coffee Extract promote fat loss by blocking gastric and pancreatic lipase. Lipases are enzymes that break down triglycerides so they can be stored in the body’s fat cells. By blocking these Lipases, Green Coffee Extract promotes the metabolism of fat.

Is bitter alkaloid of the methylxanthine family, which also includes the similar compounds theophylline and caffeine. It is the primary alkaloid found in cocoa and chocolate, and is one of the causes for chocolates mood elevating effects. Theobromine is a stimulant frequently confused with caffeine. Theobromine has very different effects on the human body compared to caffeine. It is a mild lasting stimulant unlike caffeine and does not affect the central nervous system. Theobromine remains in the body for a very long period of time.

Fat loss effects come from their ability to enhance norepineprine-induced fat loss by promoting the relocation of HSL from the cytosol of cells directly to fat deposits.

Contains a family of organic compounds that promotes the use of energy substrates, stimulates the metabolic processes, increases the solubility of fats, and can act as a mild appetite suppressant. The unique composition of adrenergic amines in Citrus Aurantium causes the release of adrenaline and nonadrenaline- most likely in the vicinity of Beta-3 receptor sites, which are found primarily in adipose tissue and the liver. Stimulation of these Beta-3 receptors results in the breakdown of fat as well as an increase in the metabolic rate. The key to Citrus Aurantium’s effectiveness is its ability to stimulate Beta-3 receptors without negatively affecting Alpha-1, Alpha-2, and Beta-2 receptors.

Has some unique metabolic and thermogenesis properties. It has an effect on thermogenesis due to capsaicins activation of the sympathetic nervous system- stimulation of epinephrine and norepinephrine. That results in enhanced energy metabolism, more calories being used and a feeling of warmth. Capsaicin can also help decrease appetite

Has been shown to activate the body's thermogenic fat-burning activity due to its high levels of Catechins. Catechins inhibit an enzyme called catechol-O-methyltranferase, or COMT, which actually degrades the body's primary fat-burning hormone, norepinephrine. By inhibiting this enzyme, Green Tea helps elevate norepinephrine levels, keeps them elevated and prolongs thermogenesis. It has also been shown that there is a synergistic interaction between the caffeine in green tea and the catechins (more specifically EGCG), which increases the body's use of calories as energy.

Is a potent and effective activator of the PPAR alpha receptor. It produces the phenomenon known as fat oxidation by augmenting the release of potent thermogenic enzymes through optimized liver function. This means that it helps increase the rate at which fat gets converted to energy and also inhibits the function of fat storing enzymes. PPAR alpha activation also increases uncoupling-proteins (UCPs). What this means is that an increase in UCPs would increase the calories needed to produce the same amount of energy.

Works as a stimulant by slowly moving through the gastrointestinal tract and energizing the body through the bloodstream. It has long been known to aid metabolism and help promote weight loss. Ginger root also improves gastric motility, which helps reduce bloating by moving food out of the stomach and aiding digestion.
Black Pepper Extract enhances your natural thermogenic activity by enhancing the delivery of nutrients into your bloodstream and enhances the efficiency of nutrient uptake by your body.

Helps your thyroid gland produce more thyroid hormone on a continual basis. It works also because it has the unique ability to greatly activate iodine update, which is the chemical trigger in the body that releases massive amounts of natural thyroid hormone into the bloodstream. The thyroid gland is one of many endocrine glands in the body whose primary function is secreting thyroid related hormones. This causes an increase in cellular enzymes that control all cellular processes and determines speed of your metabolism, or how fast you burn calories!

Grows at altitudes of 14,500 feet in the Andean mountains of Peru. It has one of the highest frost tolerances of any cultivated plant and grows where no other plant can survive. One would expect such a hardy plant to have therapeutic properties and it certainly doesn't disappoint. Maca is rich in numerous medicinal compounds including alkaloids, amino acids, beta-ecdysone, calcium, carbohydrates, iron, magnesium, p-methoxybenzyl isothiocyanate, phosphorus, potassium, protein, saponins, sitosterol, stigmasterol, tannins, vitamins B1, B2, B12, C, E and zinc. Maca root has been deemed an adaptogen, which by definition is a substance (food or nutritive herb), which brings the body to a heightened state of resistance to disease through physiological and emotional health. An adaptogen (such as maca root) can help balance, strengthen and support any area of the body under compromise due to stress.

Enhances mental and physical performance. Rhodiola rosea is an adaptogen herb, it reduces cortisol levels and improves the mood. It has been widely used by Russian athletes to increase energy. Rhodiola is cardio-protective, normalizing the heart-rate immediately after intense exercise. It improves nervous system and mental functions such as memory by increasing blood-supply to the muscles and brain, and also increases protein synthesis, (1,2,3). In this respect Rhodiola rosea is much more powerful than other adaptogens.

Is in a unique class of herbal products called "adaptogens". Adaptogens have the most broad-spectrum healing properties of any herbal medicines, but their unique value is that they specifically relieve stress. The main effects of adaptogens are an increased availability of energy during the day, a reduction of stress feelings, increased endurance, greater mental alertness, and deep and restful sleep. Also, adaptogens significantly accelerate the recovery process after illness or high stress levels.

Relieves anxiety and nervousness, especially if these symptoms have a sexual component. The herb is also used as a general tonic to improve wellness. As a general tonic it is said to act as a stimulant, improve circulation, and regulate hormonal activity. Some herbal practitioners also use it as a diuretic. It also can counter adverse physical, chemical, or biological stressors and will produce weight loss because of its ability to induce feelings of stomach fullness.

Increases nitric oxide synthase activity and plays a role in vasodialation in both fat and muscle cells.

Passes through the fat cell membrane easily and increases blood flow as a vasodialator to dormant fat cells.

Has been proven to help redistribute fat, transporting these fats elsewhere in the body to be used as energy.

Contains salicin, which, in the body, can be converted into salicylic acid. White Willow can also serve as a source of tannins- a combination which can provide a synergistic action in elevating energy expenditure through interfering with the prostaglandin production and inhibiting norepinephrine breakdown especially when combined with other thermogenic agents.

Contains essential oils, which comprise about 1.8% of the tops and are dominated by the monoterpene aldehydes menthone and pulegone which are understood to be the main active constituents of schizonepeta. These essential oils are very effective at dilating peripheral blood vessels, and increasing blood flow to both fat and muscle tissue.

Is a citrus flavanoid commonly found in grapefruit. This ingredient can increase the half life (thereby lowering clearance rate) of many supplements by interfering with enzymatic activity in the intestines. Adding Naringin is an obvious way to improve and extend the effects of many compounds. Naringenin has also been shown to have cholesterol-lowering effects.

Is believed to imitate the effect glucose has on nerve cells in the brain. Basically Hoodia fools the brain into thinking its full when its not. Hoodia contains a molecule that is about 10,000 times as active as glucose. The hoodia molecule goes to the mid-brain and actually makes those nerve cells fire as if you were full.

Serves many vital purposes in the functioning of the body and the mind. Vitamin B3 (Niacin) regulates the appetite, as well as the digestive system. It’s primary tasks within the digestive system relate to controlling the levels at which bile and other stomach fluids are secreted.