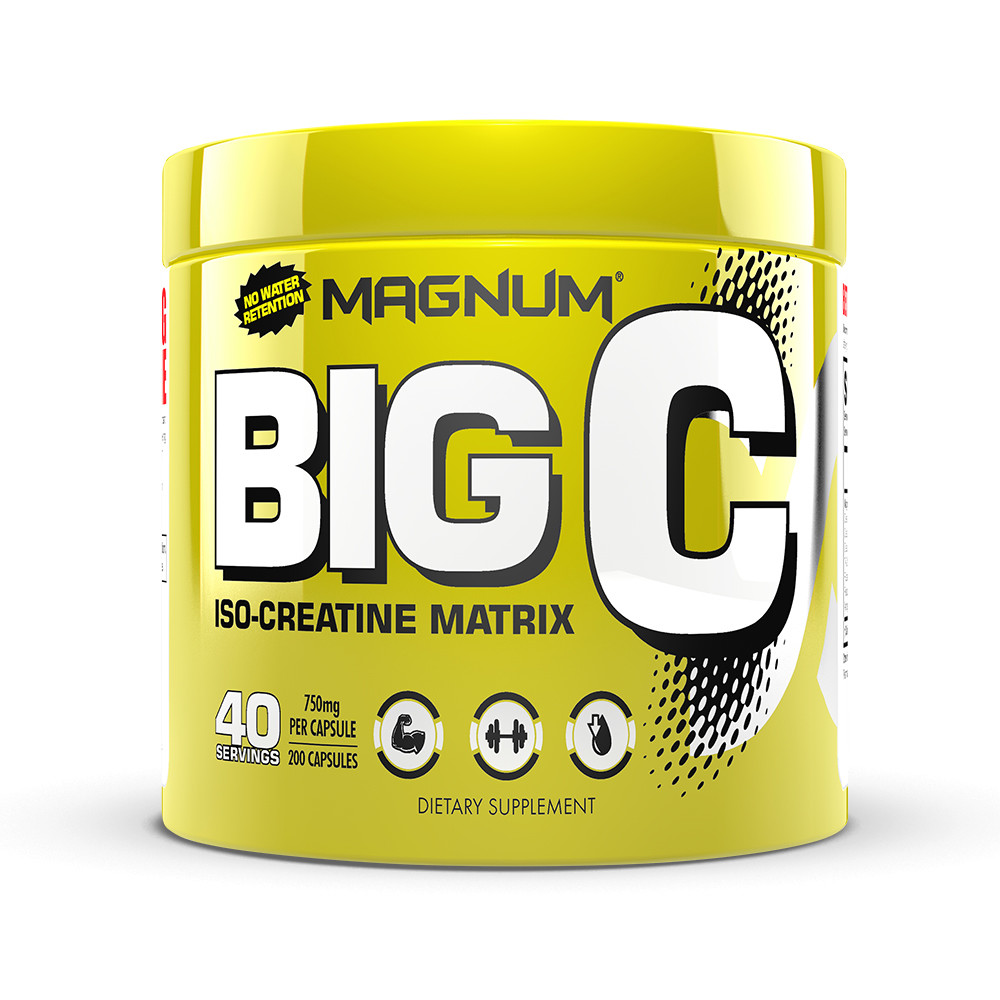 Magnum Nutraceuticals Big C CREATINE: ISOLATE, PYRUVATE, AKG, AND TRI-CREATINE MALATE ARE COMBINED TO INCREASE THE AMOUNT OF CREATINE MADE AVAILABLE TO YOUR WORKING MUSCLE TISSUE.

These creatine forms were selected for the Magnum Big C formula due to the rate and ease at which they are absorbed. More absorption equals less water retention and with Big C you have zero water retention. Equally important is their ability to not only increase strength and power, but also muscular endurance, as regular creatine fails to do so. Creatine on its own regenerates the primary energy immediately available to muscles involved in short, intense contraction.

The combination of Creatine with Pyruvic Acid, AKG and Malic Acid in Big C stimulates glucose extraction from blood into muscle during exercise and at rest. This primes muscles with a carbohydrate content essential for greater endurance. Being Krebs cycle intermediates, these compounds can also enter muscle cells, easily bringing with them more creatine than if creatine was ingested alone. The Krebs cycle is a series of chemical reactions that takes place in the mitochondria of cells and is involved in oxidative metabolism (energy production). More mitochondria are found in cells that expend a significant amount of energy, like muscle cells. This results in a higher muscular creatine concentration and significant enhancements in strength and power performance.

RUSSIAN TARRAGON (ARTEMISIA DRACUNCULUS L) when combined with creatine in the specific amount in Big C ®, Russian Tarragon creates the same environment as combining creatine with 75 grams of dextrose – creatine is “driven” into the cells by the insulin-mimicking effect of the Russian Tarragon. The best part is that RT does this without the insulin spike associated with sugar. Big C allows dieting athletes or anyone who avoids sugar in their daily diet, to enjoy the full benefits of creatine without the side effects.

GINSENG builds strength and endurance through three pathways: By enhancing the function of your adrenal glands during workouts. By increasing your body’s own creatine production. By increasing the number of mitochondria and creating greater blood-vessel density in your muscles. This means ginseng enhances endurance by increasing the amount of nutrients and oxygenation into the muscles.

ASTRAGALUS ROOT 4:1 has been used for thousands of years in traditional Chinese medicine and can help athletes utilize more oxygen, thereby reducing their fatigue. Because astragalus is an adaptogen, it can also help the body adapt to the physical stress brought on by exercise. The combination of creatine, ginseng and astragalus, in a recent human study, showed greater increases in strength and lean mass compared with the regular creatine group. Even more significant; creatine, ginseng and astragalus produced a significant reduction (10%) in body fat mass compared with the creatine group!

How to Use Magnum BIG C:

WHAT IS MAGNUM BIG C?

Magnum Big C® is a maximum strength Creatine formula designed to help you get the most from your workouts. These four Creatine sources have been proven to promote lean muscle mass and strength for individuals involved in bodybuilding and resistance training. Every ingredient in Magnum Big C® is Pharmaceutical Grade, so there is no water-weight, no bloating, no loading phase and no more excuses for poor results in the gym. With the addition of Russian Tarragon for increased Creatine uptake, Magnum Big C® is arguably the most absorbable Creatine available.*

WHAT DOES CREATINE DO?

Creatine provides energy to your muscles. Muscles receiving energy is critical for anyone active; especially anyone lifting weights, exercising, playing sports, or any other activity that is demanding and stressful to your muscles. Creatine has been shown effective at increasing lean muscle mass, muscle strength and athletic performance.*

WHAT DOES MAGNUM BIG C DO?

WHAT IS UNIQUE ABOUT..

• It offers 4 of the most innovative, bio-available forms of Creatine including the latest Ethyl Ester technology*
• Creatine Ethyl Ester is the first Creatine form to pass the blood-brain barrier, thus effectively saturating every cell in the body with a larger dose of Creatine*
• All Creatine forms in Big C® are recognized as organic compounds in your body*
• With a HUGE dose of Russian Tarragon, all Creatine is shuttled into the muscle for perfect Creatine uptake*
• There is no water weight or bloating*
• There is no loading phase*
• Your muscles will be harder and tighter*
• Every ingredient is Pharmaceutical Grade

WHO IS BIG C INTENDER FOR?

• Uses weights with their training program
• Is looking to improve strength and endurance
• Is trying to increase lean muscle mass & improve body composition
• Is trying to break through a plateau in their exercise routine
• Is a bodybuilder, fitness competitor or athlete

The Science Behind Big C:

All the strength, recovery, and muscle gains that Creatine is known for, with none of the typical water weight that hard training athletes want to avoid.
Big C is the ONLY Creatine that 100% guarantees NO bloating & no water weight! It's the perfect summertime Creatine to keep your muscles and abs hard while increasing strength, power, recovery, endurance & muscle hardening!

This is a major breakthrough study on Creatine supplementation. This means that combining Russian Tarragon, in the specific amounts in Big C, with Creatine, creates the same environment as combining Creatine with 75 grams of dextrose. This is an exciting time for dieting or carb conscious athletes, as Big C now allows their muscles to absorb the same amount of Creatine, but without the insulin spike that dextrose causes.